‘A panel of bureaucrats whose task it is to examine everyone needing medical attention and decide who gets denied healthcare. Used as propaganda to scare old, confused, ignorant people into opposing healthcare reform, despite not actually existing in the bill.’
from Urban Dictionary 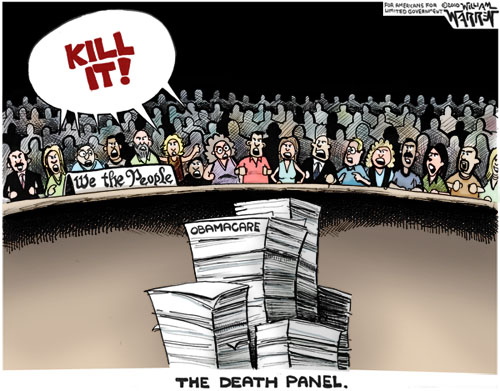 Double down, with or without the hyphen, has a number of different slang meanings. But the most relevant one appears to be the sense in which it’s used in gambling, in blackjack, to be precise. The literal definition of the gambling term doesn’t make clear, though, at least not to this nongambler, why it should be used metaphorically as it seems to be. And so I found what Urban Dictionary has to say helpful.

One of its definitions for double down is “to engage in risky behavior, especially when one is already in a dangerous situation.” The reference continues, “This figurative usage as appearing in the Oxford English Dictionary is a meaningful explanation of ‘double down’ other than the ubiquitous ‘to double the wager in exchange for only one additional card in Blackjack gambit’ in every online dictionary.”

In the news… Sheldon Adelson plans to double down on campaign donations, Salon, 12/5/12 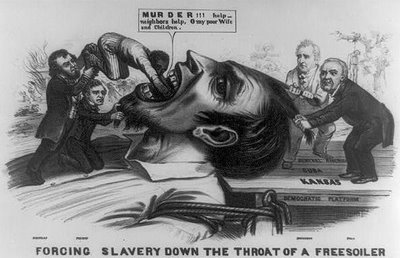 A literal doughface in the 1850s was a mask made of dough or papier-mâché. These were sometimes worn as a practical joke to frighten people. Political doughfaces were northern congressmen so spooked by the threat of civil war-“scared at their own doughfaces” as one critic put it-that they were willing to compromise with the South on the slavery issue. Southern politicians later adopted the term with the opposite meaning-colleagues from the South who didn’t defend slavery staunchly enough. Both sides despised doughfaces. Eventually, “doughface” became a general nickname for a politician whose principles were flexible on any issue-especially if money formed part of the equation.

People in the media, academia and HR departments who are concerned deeply about getting the ethnic mix of people just right.

Barry Goldwater, the Republican challenger to President Lyndon Johnson in 1964, once expressed a desire to lob an atomic bomb into the men’s room of the Kremlin. This militant attitude toward the Soviet Union allowed Democrats to attack him as a dangerous radical eager to get his finger on the nuclear button. They parodied the Republican slogan “In your heart you know he’s right” with “In your heart you know he might” (explode an atomic bomb) and “In your guts, you know he’s nuts.” They also nicknamed him Dr. Strangewater, an allusion to the 1964 movie “Dr. Strangelove,” a satire about a crazed air force general who orders a nuclear attack against the Soviets. The tactic worked. Goldwater suffered one of the most lopsided losses in American history, earning 52 electoral votes to Johnson’s 486.

a pejorative term referring to a type of political rhetoric that employs coded language- with an explicit meaning for the general population, and an additional implicit one for a targeted subgroup of the speaker’s audience.

(The term is analogous to dog whistles, which produce high-frequencies inaudible to the human ear.)

IN THE NEWS: Romney Dog Whistle: Obama’s Philosophy Is ‘Foreign To The American Experience’

one who exposes or ridicules the falseness, sham, or exaggerated claims of another

One can readily see that debunk is constructed from the prefix de-, meaning “to remove,” and the word, ‘bunk’, but what is the origin of the word, ‘bunk’, denoting the nonsense that is to be removed? ‘Bunk’ came from a place where much bunk has originated, the United States Congress. During the 16th Congress (1819-1821) Felix Walker, a representative from western North Carolina whose district included Buncombe County, carried on with a dull speech in the face of protests by his colleagues. Walker later explained he had felt obligated “to make a speech for Buncombe.” Such a masterful symbol for empty talk could not be ignored by the speakers of the language, and Buncombe, spelled Bunkum in its first recorded appearance in 1828 and later shortened to bunk, became synonymous with claptrap. The response to all this bunk seems to have been delayed, for debunk is not recorded until 1923.

In a tweet…
Winning Words ‏@WinningWordsPro
.@heyprofbow Not “may,” WILL—Scientifically proven. Never repeat a RW frame when debunking. Try NOT to think of an elephant@Political_Bill

(Thanks to @WinningWordsPro for recommending The Debunking Handbook.)